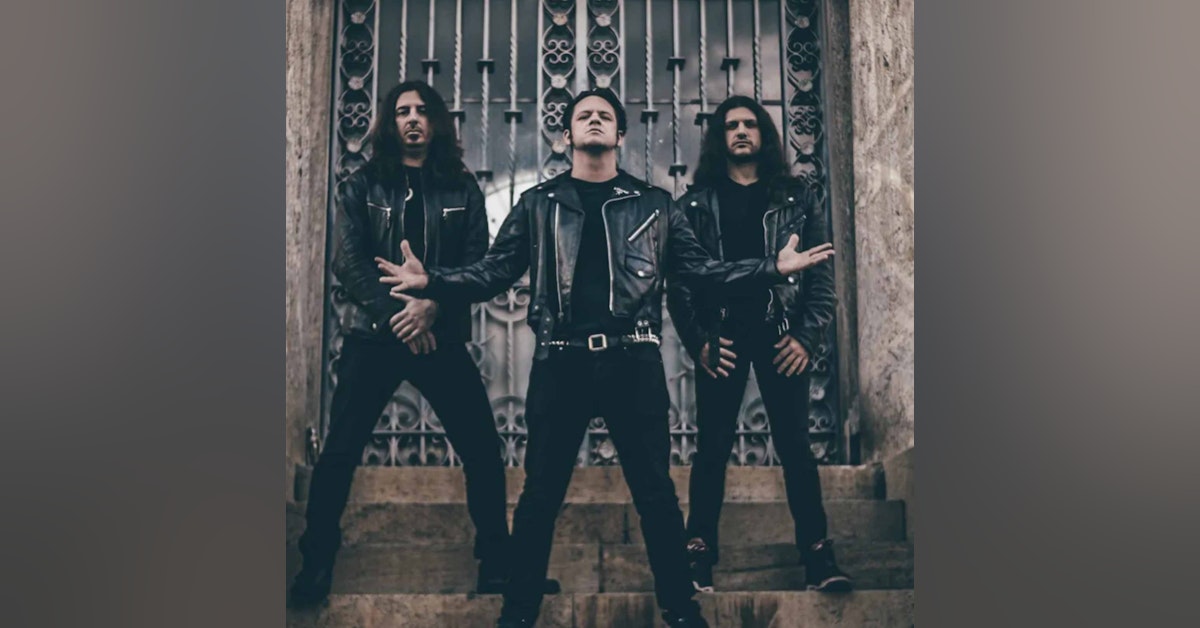 Dusty from Century Media Records band Night Demon sits down for an unfiltered talk about his journey to being an official member of the band. Dusty speaks about his ability to adapt in situations like live performances vs studio recording sessions. All that and more!

Hailing from the city of Ventura an hour north of Los Angeles, Night Demon is a classic metal trio that unites musical inspirations and influences ranging from old-school metal greats such as Iron Maiden, Metallica, Diamond Head, Angel Witch, Riot and Saxon to punk legends The Misfits.

NIGHT DEMON showcases a sound forged by a deep-seated passion for the New Wave of British Heavy Metal loaded with unmistakable notes of American muscle and swagger.

For a decade, the name Night Demon has been synonymous with top-shelf traditional heavy metal.  Indeed, the trio consisting of Jarvis Leatherby (vocals/bass), Armand John Anthony (guitar) and Dusty Squires (drums) have been long been lauded as purveyors of stellar songs, searing live shows, and a relentless work ethic.  When the world ground to a gut-wrenching halt in March 2020, Night Demon’s extensive touring plans were derailed; however, their creative flame burned brighter than ever.  In the spring and summer of 2020, the band unleashed a series of five standalone 7” singles, in strictly limited colored vinyl format.  These singles showcased brand-new original songs, cover versions, and previously unheard live recordings to tide the fanbase over during the lockdown.  Night Demon’s loyal legions voraciously devoured these releases, and all physical product sold out instantly.  Aside from the new original songs (which were also released on digital/streaming platforms), the single recordings were exclusive to the 7” vinyl pressings.  They have never been made available to the public for purchase in any other format until now.

On Year of the Demon, Night Demon collects all five of the rare, out-of-print 2020 singles into a unified compendium for release in a broad range of physical and digital formats.  The reasons for doing so are straightforward.  After all, the strictly limited nature and quick sell-outs of the initial 7” releases meant that even die-hard Night Demon fans may have missed out on the opportunity to obtain them in a physical edition.  More importantly, these tracks are too strong to be relegated to a footnote in the Night Demon discography.  “Empires Fall” and “Vysteria” mark two of the fastest, most intense Night Demon songs ever written.  “Kill the Pain” packs a wallop, distilling the band’s signature sound to its most powerful essence, coupled with a deeply personal message.  And “Are You Out There” is Night Demon’s heartfelt homage to the late, great Phil Lynott and Thin Lizzy.  The cover tunes are undiscovered gems in their own right, from the obscure NWOBHM glory of “Fast Bikes” (originally recorded by LeGriffe) to the remake of Cirith Ungol’s classic “100 mph” (featuring Cirith Ungol’s Tim Baker in a duet with Leatherby) to the Demonized take on the somber Thin Lizzy hymn “The Sun Goes Down.”  Finally, the live recordings capture some of Night Demon’s most unforgettable moments on stage.  The Iron Maiden “Wasted Years” cover is a previously unreleased track recorded the same night as Night Demon’s legendary Live Darkness album in Cleveland, Ohio.  And the two Scorpions classics (“In Trance” and “Top of the Bill”) were recorded live in Germany with special guest Uli Jon Roth (ex-Scorpions) trading licks and leads with Armand.

The point is simple: These songs deserve a wider release than the collector’s edition 7” vinyl treatment they received in 2020.  To that end, Year of the Demon compiles these prized tracks in one place for all to enjoy.  The package is rounded out by stunning cover artwork created by Don Phury.  Ultimately, Year of the Demon is aptly named because it captures a year in the life of Night Demon, a year in the life of us all, unlike anything any of us had ever experienced before.  It is a snapshot, a permanent marker, of that moment in time.

Of course, Night Demon are well aware that their audience is ravenous for fresh material.  To that end, they are excited to reveal that they are presently working on an all-new studio album, with a scheduled release date of November 4, 2022.  Stay tuned for more details soon